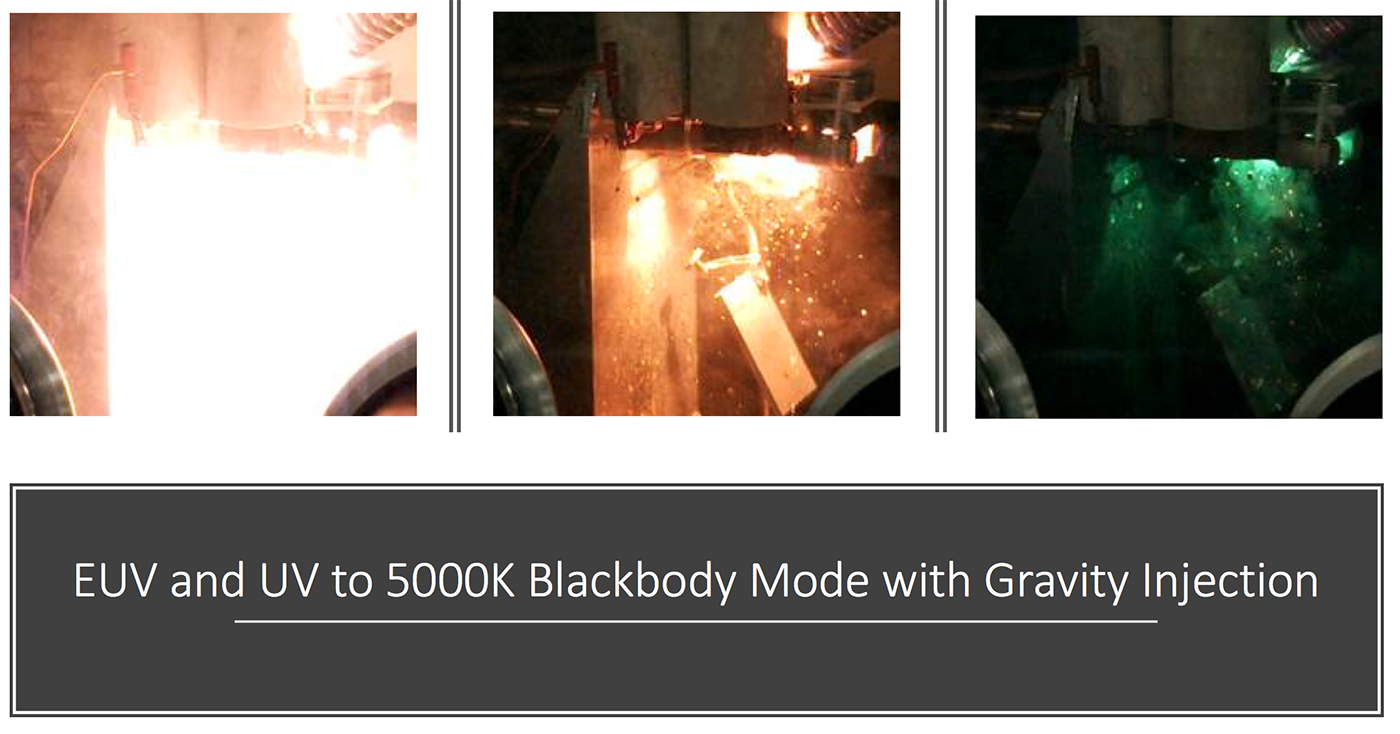 The emission transitioned from EUV and UV to 5000K blackbody radiation when the atmosphere became optically thick to the EUV and UV radiation with the vaporization of the silver that was gravity injected into an ignition system maintained in a glove box containing an argon-water vapor atmosphere.

Molten silver was maintained in a quartz tube by heating with copper coil antenna wrapped around the quartz tube (top right). Water was injected into the silver to form 1%mole entrained H2O. The molten silver was dripped into a 2 mm gap between two tungsten parallel plate electrodes each having an angled top extension to form a V-shaped funnel to the gap. The hydrino plasma was ignited by a parallel-connected pair of two Maxwell 3400 F, 2.78V supercapacitors connected in series when the molten silver gravity injected into W electrodes connected the electrodes across the gap. The plasma was maintained in a glove box having an argon (759 Torr)-H2O vapor (1 Torr) atmosphere. Over time, high-speed ultraviolet-visible spectroscopy (40 us intervals) and high-speed video showed the evolution of the soft X ray line emission with a cutoff of fused silica at 180 nm converted to 5000K blackbody radiation (continuous traces starting at 220 nm) of about 1 m2 surface area with a positive feedback cycle of silver vaporization and absorption of the hydrino reaction emission with the plasma becoming increasingly optically thick. The plasma was optically thick to a high-power laser indicating an emissivity of 1. Thus, the radiation was emitted from the surface of the plasma more that 60 cm from the electrodes wherein it is obvious from the initial stages of the plasma that the weak electric field was confined to the region between the parallel plate electrodes. There was no electrical or chemical source of the enormous power developed other than the hydrino reaction.

The same extraordinary phenomena are observed from the SunCell® as evidenced by this time sequenced spectra recorded on the SunCell® showing the transition from UV line emission to 5000K blackbody radiation during the ignition of molten silver with an electromagnetic pump due to the atmosphere becoming optically thick to the UV radiation with the vaporization of the silver.