The “BlackLight Process,” of making Hydrinos is shown schematically in Figure 1 catalytically converts the hydrogen of H2O molecules into the non-polluting product, lower-energy state hydrogen called “Hydrino”, by allowing the electrons to fall to smaller radii around the nucleus. A typical system to propagate the BlackLight Process comprises two electrodes that confine a highly electrically conductive matrix with associated water that serves as a source of reactants to form Hydrinos. A low-voltage, very high current (about one hundred times that of household currents) ignites the water to form Hydrinos and cause a brilliant burst of plasma. Specifically, a high current is passed through water associated with the highly conductive matrix such that plasma forms wherein (i) H atoms are dissociated from H2O molecules, (ii) autonomous or nascent water molecules are formed from bound water to serve as the catalyst HOH, and (iii) arc plasma is formed that massively accelerates the kinetics and vastly intensities the power of the plasma. The high kinetics or rate of the catalyst reaction to form Hydrinos is caused by creating a plasma supporting an arc current comprising a high density of positive ions and free electrons wherein the energy of the system is lowered with higher current. The higher current is caused by a faster rate of the catalysis reaction and a lower energy favors faster kinetics such that the positive feedback effect of the interplay of these factors gives rise to explosive kinetics. Water serves as the only consumable reactant in supplying the H. 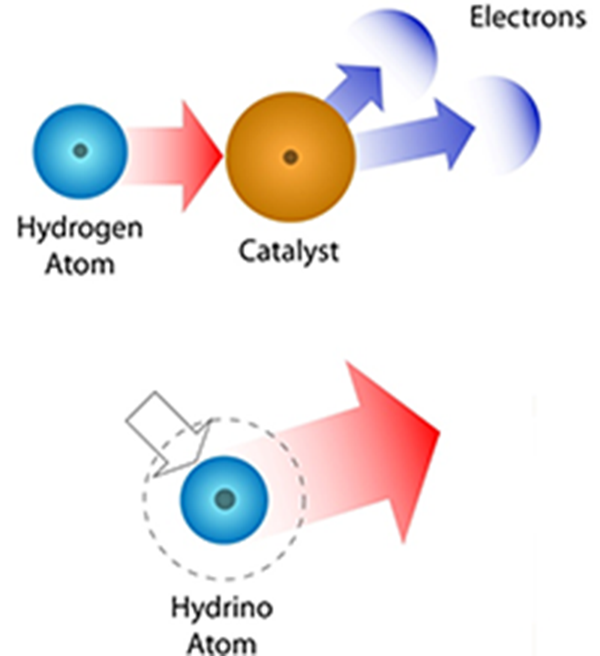 The reaction of the hydrogen atoms of water molecules to Hydrinos, the dark matter form of hydrogen, gives rise to extraordinarily unconventional emission comprising intense continuum soft X-ray of hundreds of thousands of watts with essentially no visible or infrared light. In an exemplary light source of hydrino emission, a 1.5 mm diameter, two weight percent water-containing silver shot is formed by flowing molten metal through a dripper into a water bath, and ignition is achieved by applying about 12,000 A at a voltage of about 1.5 V to the shot. High-speed photography of brilliant light-emitting expanding plasma formed from the low voltage, high current ignition of the shot is shown in Figure 2 along with voltage and current waveforms.

Figure 2. High-speed photography of brilliant light-emitting expanding plasma formed from the low voltage, high current detonation of the H2O-based fuel with a current and voltage waveform trace that shows plasma at a time when there was no electrical input power (noted by the yellow vertical line), and no chemical reaction was possible. The plasma persisted for 21.9 ms while the input power was zero at 1.275 ms. The visible light is minor (less than 1%) compared to the hydrino soft X-ray continuum radiation. 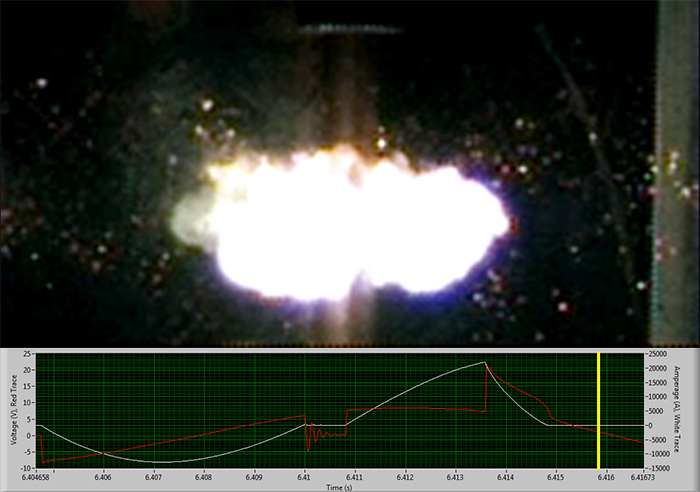 Proof of a new energy source is provided by two otherwise inexplicable observations: (i) The formation of a high-energy hydrogen plasma in the absence of any input electrical power, the nonexistence of any energy releasing chemistry with this fuel, and the further impossibility of known chemistry of this high energy. (ii) The emission of soft X-ray (EUV and UV) radiation at a voltage far less than that of the light energy produced and the inability of any known chemistry to release such high energy. A representative power spectrum of the flash of brilliant light from the ignition of a water-and hydrogen containing silver shot showing an average optical power of 527 kW comprising essentially pure extreme ultraviolet and ultraviolet light is given in Figure 3. Continuous power can be produced by systems capable of a fuel injection and ignition rate of about 1000 Hz with supporting commensurate conductive-matrix recovery and fuel regeneration operations with matching kHz rates.

Figure 3. The absolute spectrum in the 5 nm to 450 nm region of the ignition of a 80 mg shot of silver comprising absorbed H2 and H2O from gas treatment of silver melt before dripping into a water reservoir. 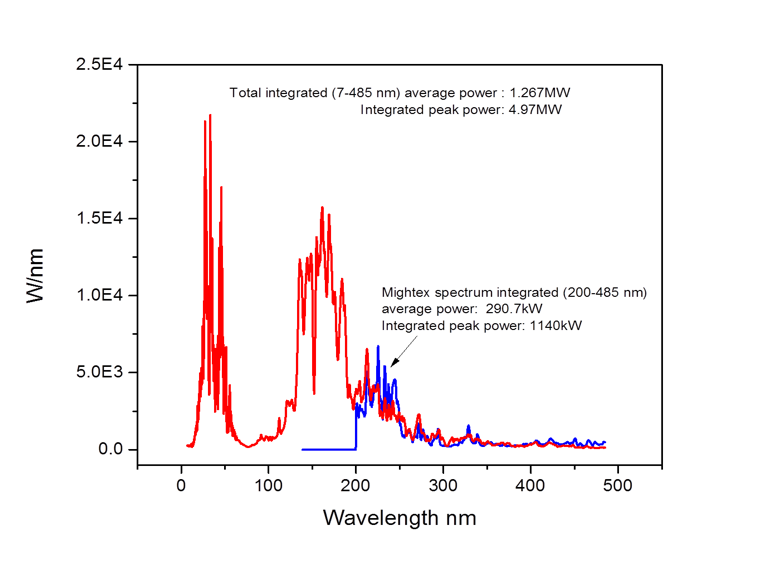