The engineering of the commercial prototype SunCell® having a light-bulb design that required new systems and a novel high-temperature-capable sealing technology was successfully tested using glass photovoltaic (PV) window cavities. In addition, the hydrino plasma reaction ignited immediately and thermally shocked the cavity as expected. 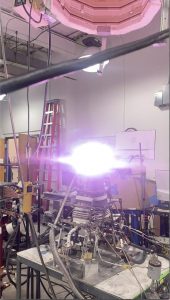 As planned, the PV window cavity was replaced with another material, quartz, that is very thermally shock resistant. 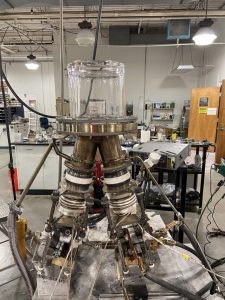 Optical power or radiation transfers power at 100 times the power per area compared to conduction and convection of combustion and nuclear power plants. The 5600K SunCell® plasma shown in our March 30th post emits radiation at a power density of 56 MW/m2. Ray-trace modeling shows that the SunCell® will heat to a very practical maximum temperature of about 1000°C and radiate 100% of power directly or indirectly thereafter through the transparent PV window cavity. The current light-bulb SunCell® design is anticipated to solve the problem of rapid thermal melt down due to the insufficient ability to transfer the massive power density of the SunCell® by traditional means such as thermal conduction. This design is also enabling of generating electricity using photovoltaic conversion wherein the efficiency can be increase to as high as 85% using light recycling involving multiple bounces of the light between the plasma and PV cells with further conversion with each cycle.