Based on a vast body of data, the Hydrino product is very likely the dark matter of the universe a form of matter so stable and inert that it has defied identification over decades despite the astronomical observation that it accounts for almost all of the mass of the universe. The terrestrial implications, confirmed by the Company’s laboratory data, is that Hydrinos are safe and non-polluting, and the corresponding source of power is inexhaustible. The continuous autonomous generation of electricity from H2O by a safe, nonpolluting, simple, reliable, sustainable, inexpensive system operating under standard conditions would be transformational to the energy industry. 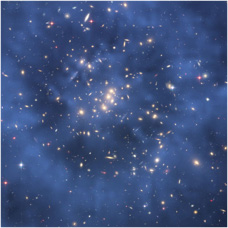 Dark matter whose identity has been sought for decades is known to comprise almost all of the mass of the universe with the small balance of visible matter being ordinary hydrogen and all other elements, also observed on Earth, at relative trace abundance. Due to its conventional absolute lack of interaction with light, dark matter has resisted detection other than by its gravitational signatures on an astronomical scale. Brilliant Light’s theoretical, spectroscopic, astronomical, and analytical data regarding Hydrinos and dark matter have been widely published in the scientific literature in over 100 articles and a comprehensive three-volume theory book. The prestigious European Physical Journal D selected as a highlighted article, the Company’s results of the predicted characteristic high-energy light emission from hydrogen forming Hydrinos using a high-voltage pinched pulsed plasma source that further reported the replication of this signature at the Harvard-Smithsonian Center for Astrophysics (CfA). The brilliant plasma of the SunCell® also produces the continuum radiation signature.

Hydrino continuum radiation (Upper curve) and helium control showing discrete line emission (Lower Curve) recorded at the Harvard Smithsonian Center for Astrophysics (CfA). (Since this light is not of visible wavelengths it is referred to as black light.) 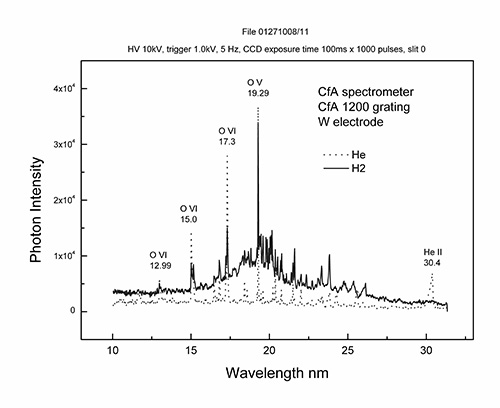 Schematic and system for producing and recording the hydrino continuum radiation.

The hydrogen emission from forming Hydrinos is extraordinary being in the high-energy, vacuum ultraviolet region of the electromagnetic spectrum and uniquely comprises a continuum of wavelengths. In contrast, the prior known hydrogen light emission from the relaxation of excited electronics states comprises discrete wavelengths at much lower energies. Brilliant Light was the first to demonstrate that hydrogen emits higher energy light than previously thought possible based on the mathematical postulated lowest hydrogen energy level or ground state of quantum theory. Moreover, Brilliant Light has published evidence that Hydrinos are a solution to many additional astrophysical enigmas [astrodata] and are a natural constituent of the Earth.

Click on this image to learn about the important development of the isolation and many analytical identifications of hydrinos from the SunCell as a chemically bound constituent of compounds and as a gas. [Analytical Presentation]