The visible-light concentrator ThermoPhotovoltaic SunCell® (cTPV-SunCell) shown in this photo comprises a plasma cell that injects hydrogen and catalyst, and two electromagnetic pumps serve as electrodes by injecting intersecting molten tin streams from corresponding reservoirs containing 10-12 kg of tin wherein the connected streams carry a low voltage, high current to form a Hydrino®-reaction plasma with an energy release of 200 times that of burning the hydrogen that can be obtained from water as a 0.5% parasitic load. 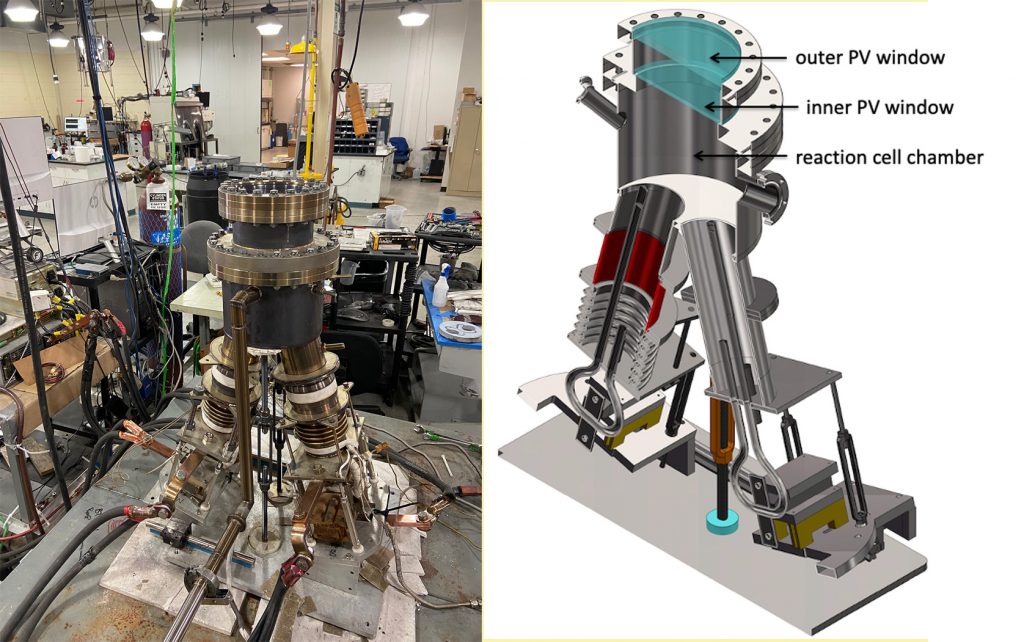 Modifications of the system for the maintenance of the transparency of the plasma window at the top of the SunCell® during operation were made over the last 60 days. Two videos are given below, one from the beginning of the program and another from the end, to provide a comparison of the results with and without the subsequent window-transparency developments. A run of December 1 with poor window transparency performance resulted in melting of the tungsten nozzle on the right as indicted by (i) the deviated injected molten metal stream, (ii) melting of the 4-mm-thick tungsten plates of the refractory liner observed glowing in the video and missing on the left, and (iii) melting of portions of the fused silica window. The program innovations and engineering resulted in plasma window performance that was excellent as shown in the What’s New video of February 5. In this video, the matched refractory lined vessel and reservoirs heated to near the failure point of the stainless-steel outer skin in seconds while the nozzle and refractory liner maintained their initial condition.

A 3000-5000K plasma emits radiation at a power density of 4.6 to 35 MW/m2, corresponding to an extraordinary 150 kW to 1.14 MW, respectively, transmitted through an 8-inch diameter window. Exploiting the physics of radiative power transfer at 10 to 100 times the power per area compared to conduction and convection of conventional base-load power sources such as combustion-powered and nuclear-powered ones, plans are to increase the plasma window area to reach a balance of the Hydrino® reaction power generated in the reaction cell chamber with that radiated by the plasma and refractory liners at elevated temperature. The emission will be converted to electricity using a dense receiver array of concentrator photovoltaic cells. The electricity will be used to autonomously power all power applications without any pollution or green-house gas emission.

*The camera attenuates the intensity of the brilliant white light emitted to reveal contrast wherein the degree of filtering is evident by the darkening of the periphery.