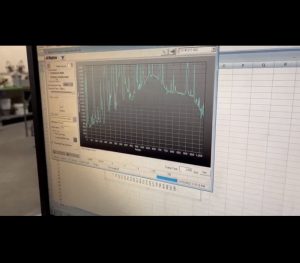 We have made several significant engineering breakthroughs on the SunCell that have reduced our time and capital required to achieving commercial scale electric power sources. Our business presentations, executive summary, and videos have been correspondingly updated on our Homepage.

The business plans provide the timeline to a 150-250 kW electric pilot enabled by the breakthrough of the PV window transparency.

We are taking spectra for the concentrator PV companies that will use them to design and build a dense receiver array converter so we can convert this big optical power into electricity. Moreover, a global engineering company is preparing a contract to support the pilot to commercial production stage.

The first power measurements were recoded with a UV-Vis-IR spectrometer over the range 180 nm to 800 nm at 100ms sampling time and a 25 um slit. This is video recording of the first spectral series recorded on the TPV-SunCell wherein the continuum feature with a peak at the point-scale of 650 corresponds to 540 nm upon wavelength conversion. All reactions conditions remained the same during the spectral acquisition at an input power that was essentially constant at 36 kW. Large optical power excursions were observed.

Note that the 36 kW of ignition power was terminated at 2s as evidenced by the absence of line emission. The emission with no input power is blackbody radiation with a profile that is very similar to the Solar spectrum. Moreover, the fluctuating intensity and the corresponding temperature much greater than any the capability of any known material indicate that the Hydrino reaction is occurring after the power is terminated. This phenomenon was previously report by us and plasma physicists Conrads and Wrubek: H. Conrads, R. L. Mills, Th. Wrubel, “Emission in the Deep Vacuum Ultraviolet from a Plasma Formed by Incandescently Heating Hydrogen Gas with Trace Amounts of Potassium Carbonate,” Plasma Sources Science and Technology, Vol. 12, (2003), pp. 389–395:
Exemplary Articles Folder

We are now recording power under unfavorable reaction conditions to compare the corresponding total integrated spectral intensity of the full wavelength range with ones with more favorable conditions while maintaining constant input power across runs. The total intensity of the former case at a given input power can serve as conservative calibration for the total intensity and corresponding power of the latter. The spectral response function of the spectrometer was determined to be flat by comparing blackbody spectral recordings with known spectra.