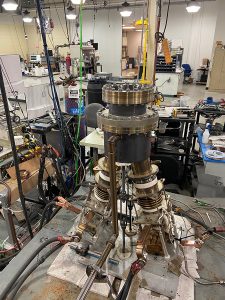 The visible-light concentrator thermophotovoltaic SunCell® (cTPV-SunCell) comprises a plasma cell that injects hydrogen and catalyst, and two electromagnetic pumps serve as electrodes by injecting intersecting molten tin streams from corresponding reservoirs wherein the connected streams carry a low voltage, high current to form a Hydrino®-reaction plasma with an energy release of 200 times that of burning the hydrogen that can be obtained from water as a 0.5% parasitic load.
Rather than horizontal injection as shown in the What’s New December 19th Video, the injection is vertically inclined so that the injector nozzles can be positioned in the reservoirs away for the plasma zone. The elimination of direct plasma exposure prevents that tungsten nozzles from overheating and melting. Notice, the glowing injector nozzles of the December 19th video wherein melting of the tungsten injectors occurs in seconds unless the reaction power is decreased, or the radiative power transfer increased. Radiation transfers power at 10 to 100 times the power per area compared to conduction and convection of conventional base-load power sources such as combustion-powered and nuclear-powered ones. The 3000-5000K plasma emits radiation at a power density of 4.6 to 35 MW/m2, corresponding to an extraordinary 150 kW to 1.14 MW, respectively, transmitted through an 8-inch diameter window. The TPV-SunCell electricity can be used to power essentially all stationary electric and motive applications at about $0.001/kWh. It can also used as a heat lamp heater to power boilers to produce steam, power an air heat exchanger to produce heated air, and power commercial and industrial ovens and furnaces.